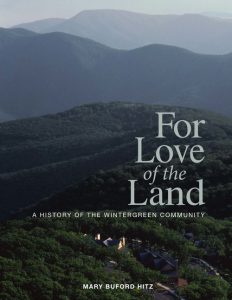 For Love of the Land: A History of the Wintergreen Community by Mary Buford Hitz. Cost of book $49.95 + shipping and handling. Allow 1 -2 week delivery.

“The land that most of know as Wintergreen today had its origins long before the resort community which bears it name. It has been a special region since pre-settlement times, and historically has survived as one of the largest and most unique single tracts of land in Western Virginia. Its strategic location near the narrowest point of the Blue Ridge has made it both a pre-historic and historic crossing for east west travel.  Its narrow spine funnels both migratory animals and an ancient forest floor into a unique thread of bio-diversity leading to a compelling case for its conservation. While the concept of conservation and development often remain a goal rather than an accomplishment, the Wintergreen story clearly shows careful planning and a conservation ethic that was ahead of its time, coming to be before many of today’s environmental requirements became law rather than man’s conscience.” ~ Doug Coleman