The idiom “nature abhors a vacuum”, although meant primarily for the world of physics, applies very nicely to the biological world and even more specifically to the Wintergreen ecosystem. Dominion Energy’s initial steps of preparing for the construction of the Atlantic Coast Pipeline (ACP) was to fell a portion of the forest along the pipeline path. The scars on the mountainside, while tragic, are in the process of healing. This week’s Nine Minute Naturalist will discuss the resilience of our forest and how nature is dealing with the ACP aftermath.

The hand felling along the path of the now cancelled (hopefully for good) Atlantic Coast Pipeline created a patch of early successional forest infrequently seen in our mature closed forest environment. The cutting in many ways imitated a natural disaster such as a tornado, derecho or some other blowdown. This man-made disaster was similar in that the trees were put on the ground, not removed and the soil was not disturbed. The lack of soil disturbance is important to the speed and quality of the regeneration. The cut area is currently in the scrub-shrub stage of development. This stage features vegetation dominated by shrubs and trees 1-10 years of age.

Nature is always prepared for the “vacuum” created by natural disasters or in this case, man-made natural disasters. The regeneration of a forest comes by different means. The seed bank is a very important aspect. Different seeds have different triggers to promote germination. Light and moisture are key to most species while some need scarification and others will require a cold overwintering period. Yellow poplar seeds can live in the seed bank for up to 8 years while other species such as ash and black cherry will live up to 3 years in the forest floor. The second way to quickly regenerate a forest is via sprouting. After being cut, many trees will either sprout new stems out of the root collars around the stump or out of their root system. Oaks and maples both put forth vigorous stump sprouts. American beech is best known for their ability to colonize an area via root sprouting.

A recent excursion to the site of the cutting illustrated the ability of the forest to recover quickly. The tree growth in the center of the cutting, where the most sun hits the forest floor, averages 10-20’ in height. On the edges the height ranges from 5-10’. The tree composition is a majority of desirables such as tulip poplar, black locust, black cherry and a variety of oak species. A majority of the trees are growing from seed which tends to yield higher quality specimens than stump sprouts. Some of these seedlings may have grown slowly in the understory and taken advantage of increased sun spurt in growth. A key benefit to the site not having been cleaned up by mechanized equipment is that the preexisting seedlings had a better chance of surviving and getting to the canopy quickly. Another benefit to minimal soil disturbance is the rebounding of the dense mountain laurel stand on the slope heading towards Fortunes Ridge. This dense mountain laurel stand covered the understory prior to being cut for sake of the pipeline. The good news is that the existing root systems are sprouting heavily and show great promise to dominate the understory once again in the near future.

The negative aspect to any forest disturbance is the opening for invasive species to take hold of space in the forest canopy. Throughout the cutting, royal paulownia and tree of heaven are occupying small bits of space. Despite their existence, the native early successional species such as tulip poplar and black locust are holding their own in terms of growth rates.

The ACP aftermath seems to be good news on all fronts. The best news is that the threat of further man-made damage seems to be abated. The forest growth and regeneration appear better than I could have hoped for and will quickly erase the ills done to it such a short time ago. 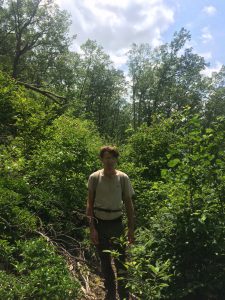 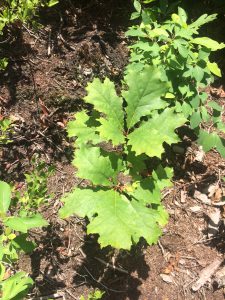 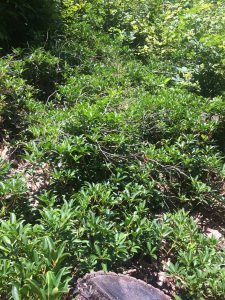