While summer continues until September 22nd, the hints of the coming cold weather are all around us. The current sign nature is giving us is the raptor migration. At some unknown point in August, certain species of raptors find it appropriate to begin their long journey to warmer winter grounds. This segment of the Nine Minute Naturalist will discuss the raptor migration phenomena signaling the coming fall season.

Raptor migration in the eastern United States begins in late July through January but peaks from early September to November. Decreasing day length triggers “zuganrhue” or migratory restlessness. Seasonal timing varies by species. Early migrants are broad-winged hawks, osprey, bald eagles and kestrels. Mid-fall migrants are sharp-shinned and Cooper’s hawks. Our late season raptor migrants feature red-tailed and red-shouldered hawks. The timing of their southern journey is also caused by weather such as a strong cold front passing through.

The Blue Ridge Mountains are a key travel route for raptors leading to their wintering grounds. The key feature mountains offer is updraft. Raptors have perfected the art of soaring. Eagles, buteos (red-tailed, red-shouldered, broad-winged hawks) and vultures use soaring to travel 250-300 miles per day. These species prefer to use the updraft and thermal currents created by our mountains to fly in the most efficient manner possible. While they are efficient, these soaring species will travel a longer route. Birds such as osprey, falcons and harriers use more of a flapping technique. While more inefficient, they can utilize a much more direct routes across land or water.

While raptors are usually solitary creatures, migration causes flocking for some species. The most obvious example of this is the broad-winged hawk. This species forms flocks of migrants called kettles. When air currents are at their best, thousands of broad-winged hawks pass by the Rockfish Gap Hawk Watch location. Over the past decade, the peak migration day corresponds with the apex of the broad-winged hawk movements south. Three different days over the past decade saw over 10,000 broad-winged hawks migrate past. The highest total occurred September 17, 2019 when 10,643 broad-winged hawks flew past the bird counters. Over that time period, the highest number of birds were seen from September 17-26th. It is a marvel to see what appears as a coordinated movement of birds wheeling and circling into the sky upon the rising thermal winds.

The best way to view the raptor migration is from a vantage that covers both sides of the Blue Ridge. We are lucky enough to have multiple options in our immediate area. Humpback Rocks and Spy Rock offer viewsheds that meet that parameter. Time your arrival to these locations so that you get to watch for birds through the late morning and early afternoon. Thermals are caused when the sun differentially heats the earths surface. When the thermals begin you will see birds begin their wheeling ascent before they get to the right elevation to soar south. The official count is kept at the Rockfish Gap and is tallied daily from August 15th to the end of November. Visit this website to get a detailed account of the happenings at Rockfish Gap. This site has not only current sightings but decades of old data to peruse at your leisure.

The times are changing and for evidence look to the sky. Any overlook at Wintergreen or in our surrounding area will suffice to witness this event. Make sure you bring your binoculars and some patience to take in this yearly phenomenon. 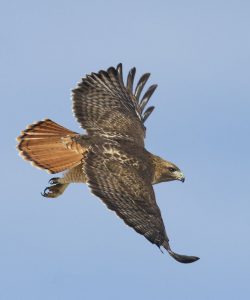 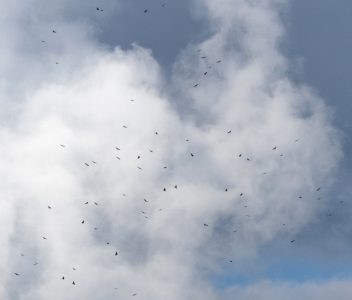