Memorial Day weekend is a point on the calendar when the mind turns to summer. This generally brings warmer weather, cookouts and many more visitors to the mountain. This season also marks the start of what I call “bear season”. With an increase in attractants such as lovely smelling grills, the bear/human interactions begin to rise steadily. Admiring and desiring to see bear is a good thing but how to minimize negative interactions?

Spring is particularly difficult on bears. Coming out of winter dens, food is scarce. Black bear subsist on mainly insects/larvae and emergent forbs and grasses early in the season. Foods paramount to their growth are the soft and hard masts of mid summer and early fall which are not available at the present time. Feeding themselves in spring requires more movement to find sufficient calories. Wintergreen represents a food island for many bears in desperate need of sustenance. The sudden increase in food sources such as misplaced garbage or groceries left in a car from Memorial Day to July 4th often create negative interactions at Wintergreen.

How do we as individuals deal with bear in our backyard? Adopting the mindset that it is their backyard as well is the first step. Bear are highly intelligent animals that have been roaming these mountains forever. The bear at Wintergreen have learned to associate homes and cars as potential food sources. Knowing they are here and the way they view the homes at Wintergreen is a baseline on how to act. Place all attractants in the appropriate place. Dog food should not be outside. Garbage goes in a community dumpster and is not stored temporarily outside. Groceries brought up the mountain should immediately be taken inside. Always act like there is a bear looking for food outside your house at all times. If it isn’t a bear, a raccoon or a raven will gladly accept your “offerings” as well. By all means, don’t feed bears! A bear fed at your house will be a nuisance at your neighbors. Once a habit is learned, it is rarely unlearned by a bear. Feeding bears is also illegal in the state of Virginia (code 1-230) so just don’t give in to that temptation.

Many Wintergreen owners and visitors have gotten the treat to see a bear up close and personal. When we come face to face with a bear how are we to act? Know first that the bears roaming the development at Wintergreen act differently from bears seen in the remote backcountry at Wintergreen. Bears that spend much time amongst the developed areas become very accustom to our presence and smells. They tend to almost act like you aren’t there. This is both positive and negative. It is positive because they don’t associate individuals as a food source as they would a backpacker in the Shenandoah National Park. At Wintergreen the cars and homes are the food sources generally. It is negative because it becomes hard to scare them off with our presence alone. A habitual visitor needs to be addressed. First, be extra vigilant to ensure no attractants are present. Second, notify the Wintergreen police. They need to monitor the presence of nuisance bears. You may need to develop a plan of determent. Air horns are an easy thing to use and keep on hand. Other methods that have proved useful are electric fences and paintball guns. Both options are non-lethal but offer enough incentive for the bear to leave your area alone. Make sure you communicate with your neighbors to ensure they know of the habitual bear and that they are being diligent as well.

Living in bear country requires each individual to be diligent in how we live. Bear smart individuals create a community that has positive bear interactions. The bears are coming so be vigilant in the way you live amongst the wild things so that each interaction is positive. 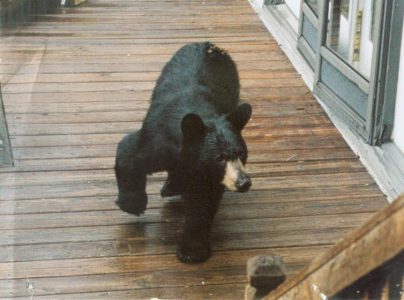