As I watched a 3-foot black ratsnake slither across my back porch and through the branches of a nearby rhododendron, I am reminded that snake season is definitely upon us. Calls are coming in more frequently and sightings are on the rise, so now is the time to learn to tell the difference between snakes that look similar. This edition of the Nine Minute Naturalist will examine the differences between the snakes that homeowners at Wintergreen find difficult to differentiate. 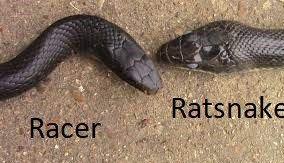 The most common snake you will see throughout the Wintergreen environment is the eastern ratsnake, otherwise known as the black ratsnake. This is the most commonly seen snake in Virginia as well as the largest snake in the commonwealth reaching lengths of 80 inches. The eastern ratsnake has a very similar look-a-like in the northern black racer. Identification of the two species starts at a distance. While both adults are predominantly black, the ratsnake tends to be a bit glossier while the racer will be a bit more matte. The head shape is also different enough that you can notice from a safe difference. The ratsnake will quickly narrow by the neck but the jaws will flare a bit wider than the rest of the head. The racer will have a head similar in width to the rest of the body. There are a couple more clues that may require a bit of close-up examination. The scales of the ratsnake have ridges giving it a textured, rough feel. The racer has smooth scales. Another technique to differentiate these species is their underbelly color. The eastern ratsnake underbelly starts white near the jaw and turns to a white and black checkered pattern. The northern racer has a cream-colored underbelly the entire length of their underside. 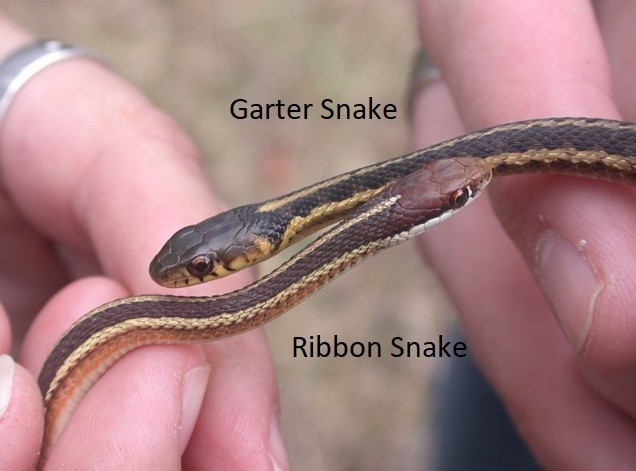 The eastern copperhead has a host of species that can cause confusion in the identification process. The best way to identify copperheads are the dark-colored hourglass crossbands that are present from birth. A second surefire way to determine if you are in the presence of a venomous snake is the vertical pupil. All venomous snakes in Virginia have vertical pupils and are a quick giveaway. The name copperhead is an apt tool to use in identification as well. The head tends to be a coppery-brown with a body that is tan to brown with darker chestnut crossbands. 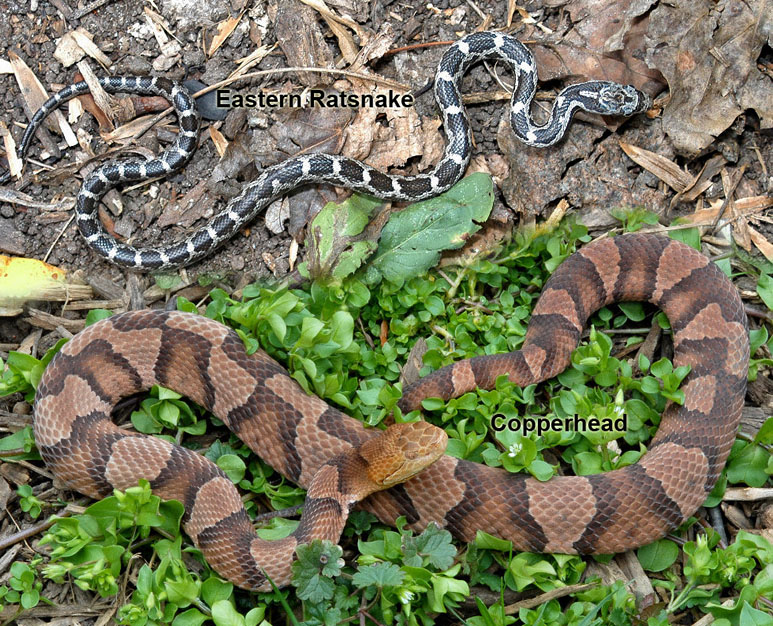 Another common Wintergreen snake that gets confused with the copperhead is the northern watersnake. Both species of snakes can be found in similar environments chasing amphibians while the watersnake will be frequently found in the actual water. The primary difference can be found in the shape of the patterns. Copperheads have an hourglass that is wide on the sides and narrow along the spine of the snake. The northern watersnake is going to have a pattern that is widest along the spine and narrow along the sides.

Almost everyone has a strong opinion of snakes one way or another. For those that fall in the “hate” camp, knowing how to identify the snake species frequently found at Wintergreen is the key to being a bit more comfortable around our slithering friends. The next time you come across a species you are unsure of, take a few minutes to correctly identify it.