The noises of nature rise precipitously as we enter the spring season. At Wintergreen, our rise in acoustics can be largely attributed to our frog population. Our woods, streams and ponds are loaded with these noisy amphibians that give such character to the Wintergreen woods in spring. This edition of the Nine Minute Naturalist will delve into the species responsible for the cacophony of calls we hear during our spring rebirth.

The sound of some animals is synonymous with a season. The spring peeper is just that animal. They declare the end of winter with a shrill high pitch note that can reach 100 decibels. Once joined by hundreds of their friends, this sound makes the idea of a “peaceful” woodland obsolete. They are among the first animals to call and breed each spring. They tend to be found in moist woodland areas adjacent to wetlands. At Wintergreen, a great place to listen to this onslaught of noise is along the golf course and the numerous ponds adjacent to woodlands. These small woodland ponds are ideal breeding habitat for spring peepers and tend to be loaded with them from March to June. Here is a link to their distinctive sounds. 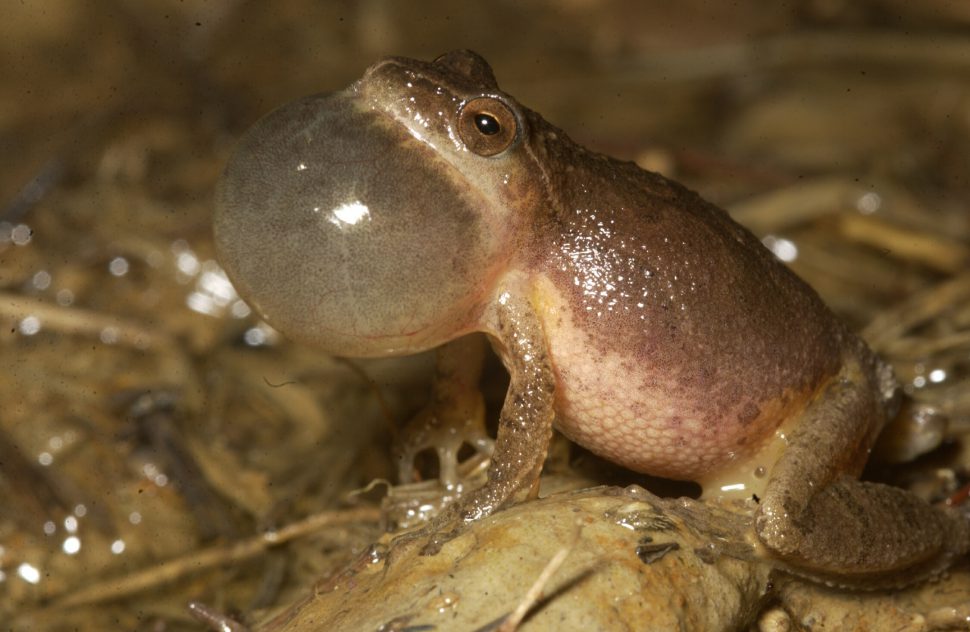 Another common frog that will provide ample auditory evidence of their presence is the gray treefrog. The gray treefrog begins its calling in April at Wintergreen. The distinctive short fluty trill call is memorable and can be heard starting at dusk and continuing for a few hours each evening. This boreal species seeks habitat containing trees and a water source. They remain near the forest floor when young but ascend to the canopy with age. Eggs are laid in the water. Gray treefrogs can change their skin color based on time of day and surrounding temperature. The skin becomes lighter at night and darker during the day. Here is a link to their lovely call.

The pickerel frog is not quite as common as the spring peeper or gray tree frog but the unique call makes it an easy one to pinpoint in the midst of many other sounds. The garbled, throaty song of the pickerel frog starts in April and lasts until early June. They are usually found in Wintergreen’s cool, clean streams but will lay their eggs in any temporary pond. They can be identified by their chocolate brown spots in two rows between the folds in their back. They have a look-a-like, the leopard frog, that will have irregular brown spots. Careful if you choose to pick one up as they produce a toxic skin secretion that is irritating to humans. Here is a link to their throaty call.

The American bullfrog is common at Wintergreen, especially at our lower elevations. They emit a deep bellow that sounds like “jug-a-rum”. This amphibian is almost exclusively aquatic and can be found at any of our ponds at Wintergreen. They are extremely territorial and use their call to announce their presence to rivals and for mates. They are the largest frogs in North America, growing up to 8 inches and 1.5 pounds. Here is a call you may find familiar.

The spring is the time to familiarize yourself with the calls of these amphibians that make Wintergreen home. We have entered the season where your peace and quiet will not exist and instead replaced with a mismatch of melodies that make our environment unique. The time is now to find your favorite location to learn about Wintergreen frogs.