Few topics may be less popular to discuss than spiders but alas the season of “spider web in the face” has arrived. From now until early fall, any venture into the woods will be rife with swinging arms and dramatic head movements as we attempt to elude new webs. If you are going to have spiders on your head, you should be knowledgeable of what you just made contact with. This session of the Nine Minute Naturalist will cover a few of the spiders that cause you to dream of cold, crisp days of autumn.

The first spider to appear in abundance at Wintergreen in the heat of mid to late summer is the spined micrathena spider. This mostly black spider is easily identified by the angular abdomen. They are a member of the spiny orb weavers group and are generally woodland spiders that love to build nests across the trails of Wintergreen. Our trails or any other opening in the forest floor act as fly ways for insects and thus tend to attract the interest of their predators. Their hard spiny body is most likely a defense against predation as it would make a less than ideal meal going down the throat of a larger predator. This spider is harmless to humans but does a great job decreasing the fly populations at Wintergreen.

Another common spider found primarily in August is the black and yellow garden spider, another member of the orb weaver family. This large spider, identified by its black and yellow coloring on the abdomen, is found more commonly in our landscape settings but is occasionally found in the woods. The black and yellow garden spider makes nests around knee to waist height with a distinct thick silk strand that zigzags down the middle of the nest. Although the large size of this spider is a bit intimidating, it is harmless to humans and does flee when disturbed.

The most visually intriguing spider that graces our presence in the late summer is the marbled orb spider. Also, a member of the orb weaver family, this spider is identified by an orange head and upper legs, black and white banded lower legs and a marbled abdomen. These large spiders are found primarily in the woodland realms of Wintergreen especially near our waterways. When their head high webs are disturbed, the marbled orb spider tends to get to cover on the ground and stay hidden until danger passes. This member of the orb weavers is most common in late August to early October. Though harmless to humans, these spiders act as great “organic” pest control.

Each of these spiders will be found quite often by anyone traveling along our trails and woodlands in the late summer months. I advise you walk with a proper spider web stick to clear your way as you cover ground but leave our natural pest control unharmed. Happy “spider web in the face season”! 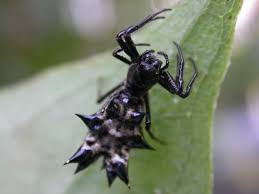 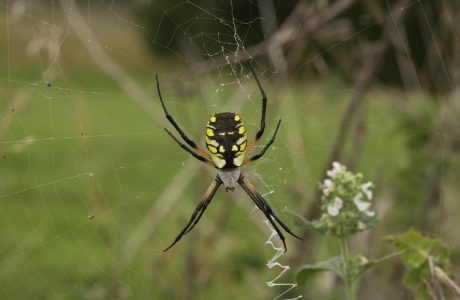 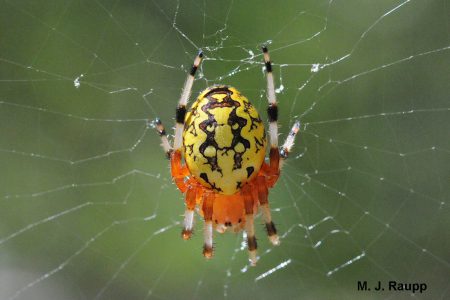