The Amphibians of Autumn

Autumn is not the time most outdoor enthusiasts dwell on the creatures of the reptile and amphibian families. Snakes are headed to their winter den sites, frogs are contemplating burial at the bottom of a pond and box turtles are seeking out the perfect log in which to hibernate. One amphibian maintains a relatively active lifecycle in the fall, the salamander. This issue of the Nine Minute Naturalist will feature a few of the salamanders you can still find cruising the landscape long into the fall.

Cooler temperatures are upon us and the signs of preparation for the winter season are all around, but the salamander is still in his comfort zone. Salamanders tend to prefer cooler, damper conditions than most reptiles and amphibians. In the spring, at the first hints of warmer days, salamanders can be seen racing towards their reproduction grounds, moving well before you would think of seeing cold-blooded creatures. Their love for this weather is just as verifiable in the fall as they are moving towards their winter abodes and feeding in preparation for the long winter rest. Some salamanders, such as the marbled salamander, breed and lay eggs in fall. Wintergreen is laden with great locations to find salamanders. The Shamokin Springs Nature Preserve, Fortunes Ridge Trail, and large portions of the Old Appalachian Trail have the perfect combination of moisture and terrain to host a wide variety of species. 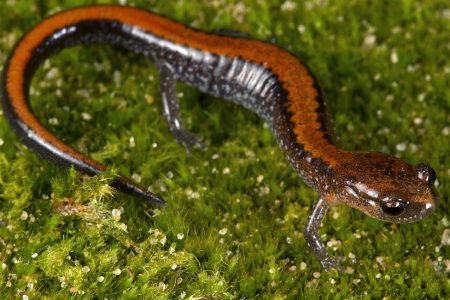 One of the more common salamanders found at Wintergreen is the eastern red-backed salamander. This salamander is common throughout most of Virginia and prefers to live in the leaf litter of an eastern hardwood forest. They can commonly be found in rock crevices and in rotting logs. They are a top end predator of invertebrates in the detritus food chain such as earthworms, ants, beetles, centipedes and millipedes. Despite the name “red-backed”, this salamander can be found in all black form or with a yellowish stripe down the back instead of the usual red stripe. 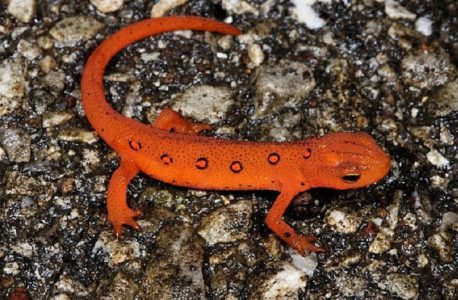 Another salamander routinely seen at Wintergreen is the red-spotted newt. This salamander has a very unique life cycle. They have an egg, larval, adult, and terrestrial eft life stage. The eggs hatch in the water and the larvae stay in the water for 2-3 months. They then metamorphize into the red eft, which is the most commonly seen stage. The terrestrial red eft lives in the woodland environment moving about searching for prey on rainy or humid days and nights. They stay in the eft stage approximately 4 years after which time they change into the adult stage and return to the aquatic life in the water. This stage is the genesis of their name due to their green bodies and red spots. 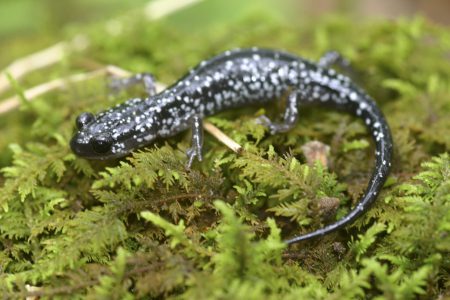 A few more easily found species at Wintergreen are the northern dusky, the southern two-lined, and the white-spotted slimy salamander. The northern dusky is commonly found within a few feet of a stream. Its coloration is brown with muddled black spots along the back. The southern two-lined salamander is known by the two black lines going down the length of the back. This species is semi-aquatic and can be found in numerous environments near water. The white-spotted slimy is one of the biggest salamanders at Wintergreen reaching up to 7 inches in length and are black with white spots all over the body. They are found in the moist leaf layers of the upland oak-hickory forests.

When going through your mental checklists of cool autumnal happenings in the forest of Wintergreen, don’t forget about the movements of our slimy friends. As you walk along the trails on a wet fall day keep your eyes peeled for the fall-loving salamanders of Wintergreen.