The Misery of Mange

It is fascinating that the greatest threats to health and welfare come in the smallest packages. The other day amongst a group of kids the question arose of the deadliest animal on earth. My know-it-all son declared that the mosquito was the greatest killer and he was correct. While the mosquito is quite a pain, the current scourge of the wildlife population at Wintergreen is caused by the tiny mite. This edition of the Nine Minute Naturalist will go into depth on the mange currently afflicting our wildlife.

Wintergreen is a wildlife paradise. From Stoney Creek to the top of Devils Knob, a variety of optimal habitats allow for population such as deer, bear, fox, coyote, bobcat and rabbits to thrive. Increased populations also bring increased problems. Too many deer mean more car accidents. Too many foxes mean chicken owners had better beware. An overpopulation of bear brings about house and car break-ins. The problem of mange is a whole different “beast” that can affect a whole host of mammals including humans.

Mange is a highly contagious skin disease caused by mites burrowing into the outer layer of skin in a wild or domestic animal. These microscopic troublemakers form tunnels in the animal’s skin and lay eggs. After three days the eggs hatch and larvae move in the tunnels or to the surface of the infected skin. The larvae turn into nymph which turn into adults and the process goes into repeat mode. Mites are transferred to new hosts when an affected animal contacts another animal. Under perfect conditions, mites can fall from the skin and survive in the environment for a bit, infecting animals who contact this contaminated area.

Identifying infected animals is not a complicated process. The mange causes intense itchiness, hair thinning and loss, thickened skin, and scabbing. The behavior of animals tends to be altered, exhibiting a lack of concern of their surroundings thus increasing the likelihood human interaction. Severely affected bears are visibly emaciated and lethargic. To get a confirmed diagnosis, identifying mites via microscope is required. 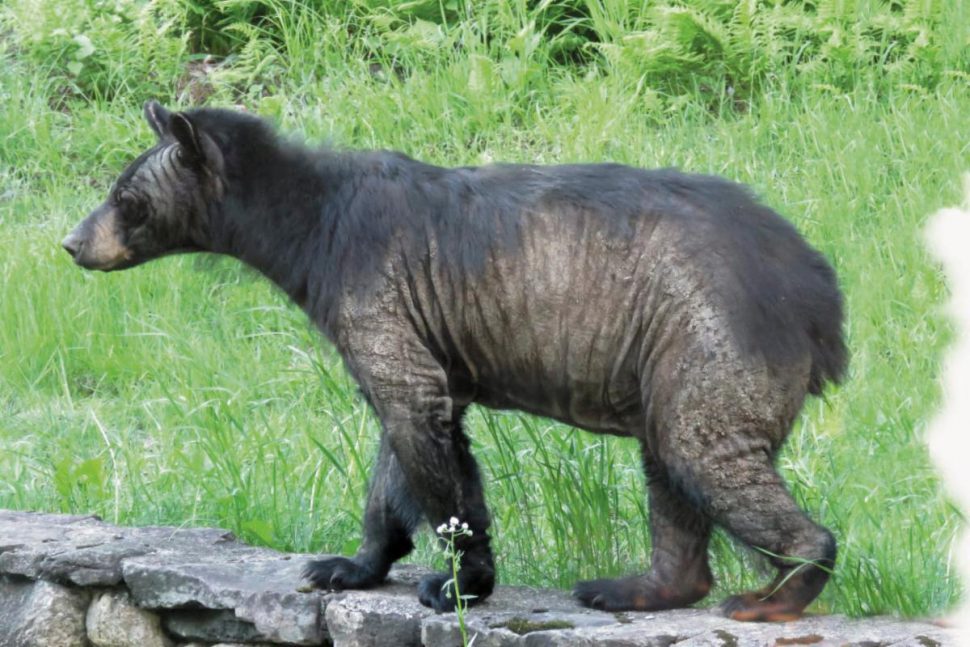 The most visible and disturbing mange problem at Wintergreen at the moment is within the bear population. Multiple bears have been seen to be exhibiting mange symptoms. Mange in bears has seen a dramatic increase from the 1990s to the present. The sightings have sped up rapidly over the past few years with an over 300% increase over the past three years. Although the cause of the sudden rise is unknown, the bear population rise must play a part in the spread. Without great means to survey the black bear population, indicators of population numbers can clearly be seen in the rise of black bears harvested each year. Despite the continued decline in bear hunters, the record for harvests was set in 2019/20 and second all time is 2020/21. As bear populations rise so do interactions among bears. On a trail camera on Crawfords Knob, four distinct bears visited within a five-day period, one bear showing mange symptoms.

It is easy to see how mange spreads through a normally isolated species. An obvious spreading opportunity is the breeding season. Bears mate in June and July. One dominant male can breed with a host of female bears acting as a spreading agent. Another concentration point is the resort itself. Bears living far from civilization are faced with somewhat evenly spread food sources. Bears living near our developed community have concentrated food sources such as dumpsters, trash cans, etc. This concentration may be another reason we are seeing mange spread through bears at Wintergreen. 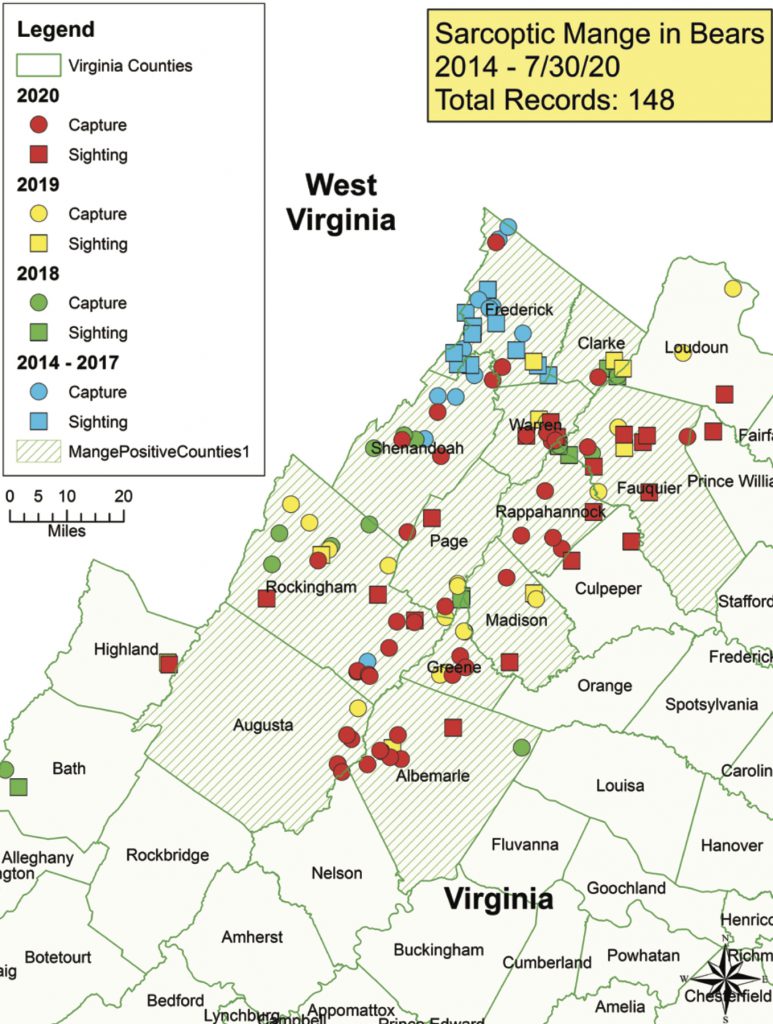 The problem begs for a solution. Mange can be treated by administering medication on an individual basis based on body weight and other factors. Severely affected animals may die despite treatment due to a deteriorated body condition beyond recovery. Both the Wildlife Center of Virginia and the Virginia Department of Wildlife Resources (DWR) have successfully treated bears and released them in good health. Sadly, the treatment doesn’t cause immunity. Bears tracked down later by DWR via radio collars were exhibiting mange a year later. Having to individually medicate bears and the legality of leaving food out for bears, removes the ability to treat bears in the wild. There is research being done on a one-time treatment that can be applied in the field. This will alleviate the stress and difficulty of capture, transport and treatment at a wildlife rehabilitation center.

Mange is not only a wildlife problem but a domestic animal/human problem. Direct contact with an infected animal can pass the mites onto your animal or yourself. Human infections result in a skin rash that usually resolves without treatment. It may require treatment in children and immune compromised individuals. A pet with mange is best managed through treatment, although a healthy animal can survive mange. Dogs tend to show symptoms of intense itching and hair loss. If these symptoms arise, contact your veterinarian for the best management of this infection.

This problem is not going away soon and is particularly sad to watch unfold in our bear population. The infection running rampant has the attention of the major players dealing with wildlife in Virginia such as DWR and The Wildlife Center of Virginia. Feel free to pass on any sightings of mange infected animals to forestmanage@tnfw.org.