When the topic of snakes comes up every individual has a well defined love/hate scale for our scaly friends. Few people I have met have a neutral stance on snakes. This topic for my weekly article arises after a friend’s son was bit by a timber rattlesnake last weekend while hiking in the Shenandoah National Park. While the 5 year old young man is on the road to recovery, I am afraid his opinion of snakes may be prejudiced forever. Whether you love or hate snakes, knowledge of our two poisonous varieties is helpful every time you enter the woods at Wintergreen.

Copperheads are the most common poisonous snake in Virginia, as well as the least venomous. They are common in our Blue Ridge region but tend to occupy our forests below 2500 feet in elevation. The copperhead gets its name from the copper-like coloring on its head. It has a tan body with brown hourglass bands on its back. Juvenile copperheads have sulfur yellow tail tips. Look-alike snakes for copperheads include corn snakes, juvenile rat snakes and northern water snakes. They can be found on a variety of terrain from rocky outcrops to lowland wetlands. Their habitat requirements revolve sunlit areas with required food sources and year round habitat. Their prey sources are quite diverse. Their dinner menu includes an array of invertebrates, mice, chipmunks, birds, other snakes, amphibians, and a host of other small animal options. These requirements often bring them near human habitation.

What differentiates copperheads from other snakes, and particularly the timber rattlesnake, is its demeanor. Rarely are snakes aggressive. Copperheads are usually the exception to that rule. They tend to have a bad attitude from birth and lean towards the definition of aggressive. This results in the majority of poisonous snake bites in our area, for pets and humans, being bites from a copperhead. Unlike the timber rattlesnake, they don’t give a warning before the strike so extra caution must be used in areas known to host copperheads.

Timber rattlesnakes are large venomous snakes with highly variable appearance. They have three primary color phases. The “yellow phase” features a yellow head with black or brown blotches with a yellow body. The “black phase” is a black head with black blotches on a dark brown to black body. The “canebrake phase” features dark brown or black blotches on a tan body. Some snakes have all three phases while others will live a lifetime in just one phase. Timber rattlesnakes tend to be found in upland hardwood or mixed pine forests in areas of rocky or talus slopes. They feed on small mammals, birds and amphibians. They have few look-alikes due to the presence of their rattles.

Despite their sinister appearance, the timber rattlesnake has a cool, mostly passive demeanor. A majority of my interactions with timber rattlesnakes occur without the snake either coiling or rattling. They know I am not prey and are content to let me move on with merely more than a tongue flick. In the case of my friend’s son, he jumped down off a rock and got bit without a rattle, suggesting he surprised a dozing, unsuspecting serpent. Judging by the fang width, he got bit by a large timber rattlesnake but definitely didn’t get a full dose of venom.

My recommendation for Wintergreen residents is to not enter the woods in fear but with wisdom. Staying on-trail helps in identifying a snake threat. If you come across a poisonous snake on the trail, check for other snakes off trail and then give the snake a wide berth before returning to the trail. If you find a snake near your house, avoid the instinct to immediately kill the snake. Give the snake plenty of room to move and feel free to call The Nature Foundation. I can offer advice and may be able to assist in moving the snake to a safer location. 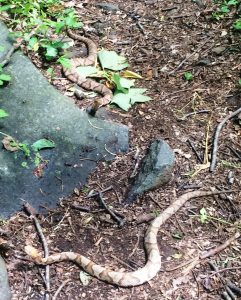 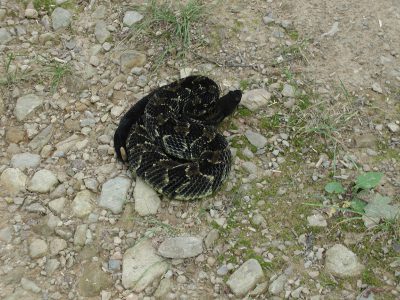