The Smell of Spring

The harbingers of spring come in a variety of forms. From migrating birds to budding trees, few are ready when one of the earliest signs of spring emerges from its wet soil home. This omen of spring is the well named skunk cabbage that appears in late winter in wetland soils across the Piedmont. This Nine Minute Naturalist goes in depth on one of Wintergreen’s earliest flowering species, skunk cabbage.

Few expect to walk the woods in February and see flowers marking the beginning of a wonderfully long bloom season at Wintergreen. If you walk Allen Creek Nature Preserve or pay good attention as you drive along wet portions of Monacan Drive, you will begin to see flowers emerge from waterlogged soils. Skunk cabbage is a wetland obligate species that is found in wet meadows, swampy woods and adjacent hillsides just so their roots can find the water table. Skunk cabbage starts its life cycle by sending up its flower first. As early as late January, the brownish-red flower emerges from the cold soil. The emergence, despite winter weather conditions, is possible due to it being thermogenic meaning it generates metabolic heat. 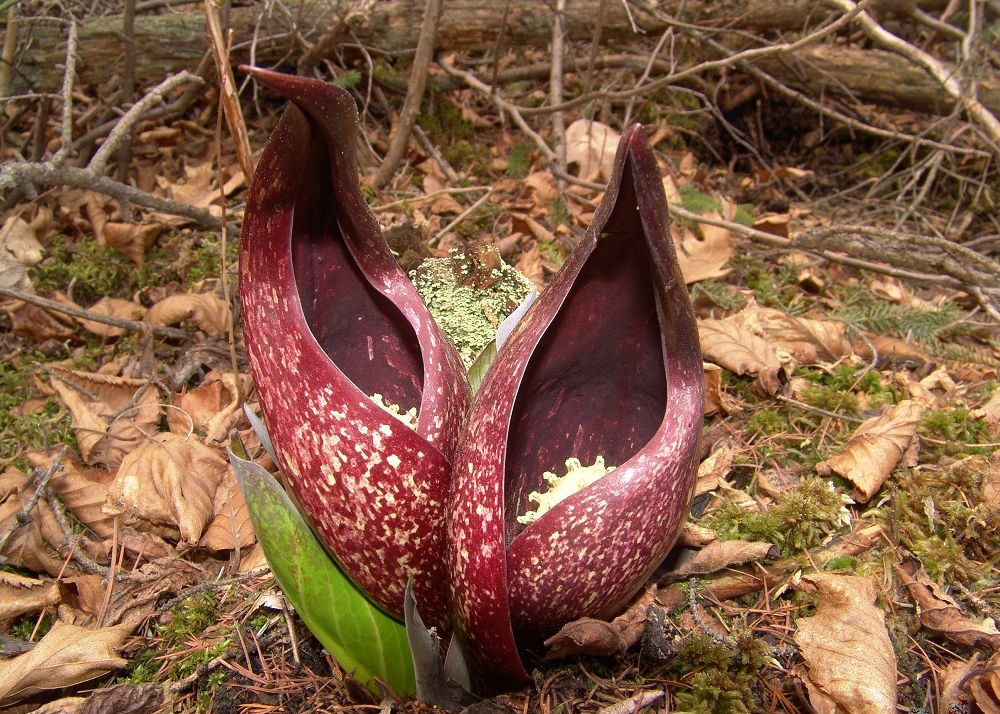 The unique skunk cabbage flower is made up of two parts. The spathe is the curved, pear shaped exterior portions that ranges in size up to about 6 inches in height. The color pattern consists of irregular spots and lines in shades of green, maroon and purple. The second part of the flower is a minute cluster shaped in a ball-like group called a spadix. By April the flower gives way to a rosette of leaves in bright green. The leaves grow to about 1-2 ft and a grouping of skunk cabbage can be seen from quite a distance.

The plant earns its name due to its odorous nature. Beginning once the spathe emerges from the soil, the unagreeable smell is used as a means to attract carrion loving insects that will serve a pollinator for skunk cabbage. The smell, reminiscent of decomposing flesh, attracts the insect species active even in winter months such as carrion and dung flies, as well as beetles, bees and mosquitos.

Sometime in June, the leaves dissolve away and the fruit heads emerge. The fruit is roundish balls, about two inches in diameter. By mid-August the fruiting body falls apart and leaves seed to be eaten, decompose or to germinate.

The uses for skunk cabbage are minimal at best. The leaves have calcium oxalate crystals which are irritating and a bit toxic to the stomach. Most animals avoid eating them as should the standard Wintergreen hiker. The roots are considered toxic, but Native Americans reportedly used them on wounds and for toothaches, convulsions and cramps. They can be used in a garden setting given the proper soggy soils as it does add a nice aesthetic.

While this plant will never illicit love and devotion afforded species such as trillium or ladyslippers, skunk cabbage has quite the important place as a herald of the coming spring. So, get out into the woods of Stoney Creek or any other wet woodlands and catch a glimpse or a whiff of the first bastion of spring, skunk cabbage.