There are few autumnal phenomena that are more fascinating, in a creepy, crawly way, than the movement of serpents into communal snake dens. The Appalachian Mountain chain, especially in the Central Virginia region, is home to many interspecies snake dens that are sure to increase the anxiety level in even the most ardent woodsmen. This Nine Minute Naturalist will explore the fall migration of snakes into snake dens.

As are most seasonal phenomena, the changing day length signals the need for snakes to move towards winter abodes, while weather conditions will trigger the actual entrance into the snake den for the winter.  Due to snakes being ectotherms, animals that depend on external heat sources, they are in a race against the first hard frost of the year. Being caught by a sudden cold snap can prove fatal if not within the reach of a suitable den or secondary den. Snakes do not hibernate but instead become much less active, a state called brumation. Brumation is an extreme slowdown of the metabolism. In preparation for brumation, snakes use pre-frost fall to actively feed to prepare their bodies for the long fast of winter. A snake insufficiently fattened for winter will struggle to survive. Snake brumation in the Blue Ridge lasts for half the year. Snakes tend to enter dens by early October and emerge in April. 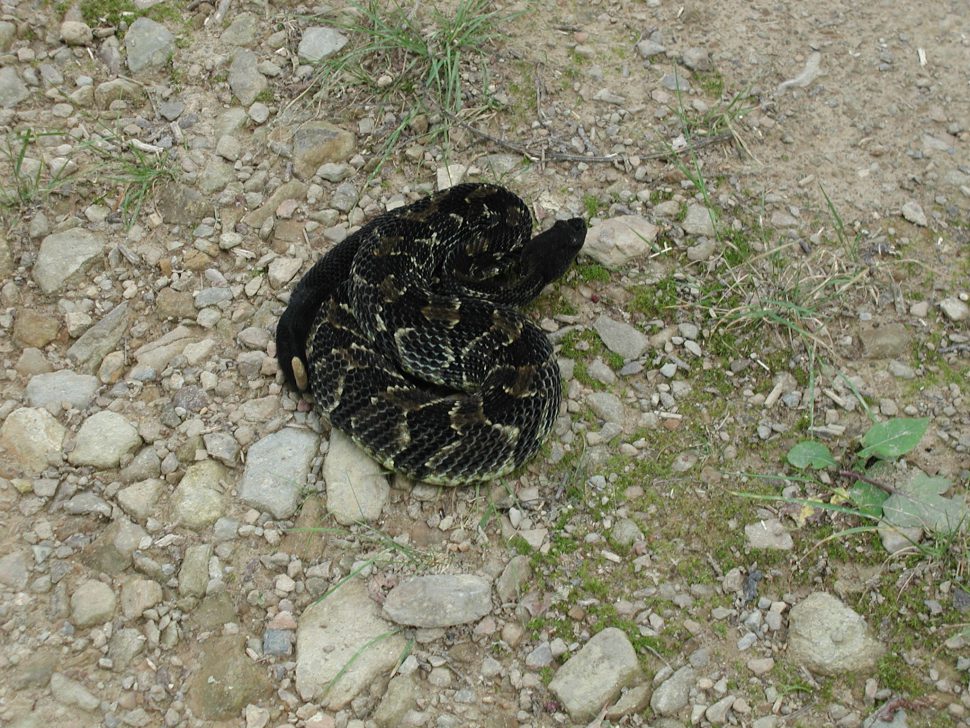 The timber rattlesnake is known for its tendency to form large groups in winter den sites.  These den sites act as the central focus in the life history of timber rattlesnakes. These ancestral dens tend to meet certain characteristics. They are usually south facing near forest openings to maximize sun exposure. Dens tend to be found in rock caves or crevices that are deep enough to be protected from frost. Most den sites studied average about 30 snakes but can be as large as 120-200 in extreme cases. These dens host not only rattlesnakes but occasionally black rat, black racers, northern copperhead, and eastern garter snakes. Studies have shown these dens tend to be well spaced about our landscape averaging about 1.1 miles apart. 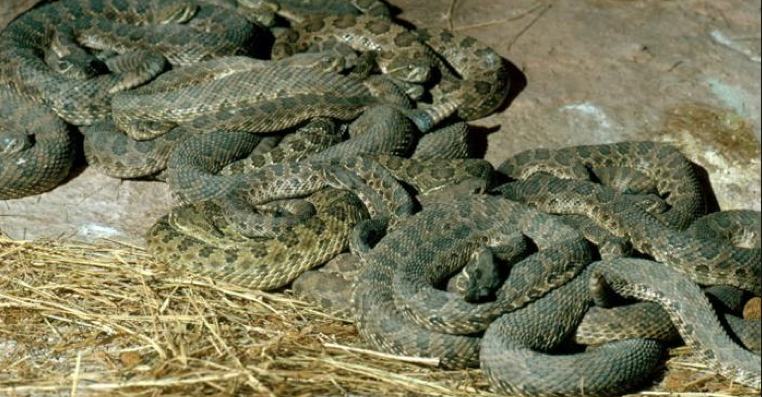 The brumation period, like all good things, must come to an end. The warming, longer days trigger the process of returning to their hunting grounds. Once days begin to average 60 F, the community of snakes begin to go their separate ways. The average distance rattlesnakes migrate away from dens is .5 to 1 mile. Males tend to expand their range most significantly and can travel up to 5 miles in search of a mate.

Wintergreen and our surrounding portion of the Blue Ridge range are home to numerous denning sites. Years ago, we hosted William “Marty” Martin, a renowned biologist specializing in rattlesnakes, for a Spring Wildflower Symposium. He toured with a small group of adventurous participants to nearby sites in search of den sites. Years of experience hunting for snake dens has given him a sixth sense for snakes, and within a short time we found multiple locations brimming with timber rattlesnakes.