Wintergreen offers spectacular animal sighting opportunities ranging from hordes of chipmunks to the sometimes-lovable black bear meandering through the woods. One rare sighting that has become a bit more common recently is the coyote. While not a native resident, this close relative to the domestic dog shows up on trail cameras with great frequency and can be heard yipping and howling around dusk and into the evening throughout the Wintergreen terrain. This episode of the Nine Minute Naturalist will focus on the wily coyote.

Native west of the Mississippi, coyotes arrived in Virginia two ways: natural migration and releases by fox hunters. The first report of free ranging coyotes in Virginia was in 1952 in the Burkes Garden area of Tazewell County. There are numerous reports of coyotes being imported into the state during the 1950s and 60s. In some cases, coyote pups were inadvertently mixed in with fox pups that were imported for fox hunting purposes. During this period, coyotes were expanding their natural range eastward and now populate every county including the Delmarva Peninsula and one of the Barrier Islands.

Coyotes are true omnivores, consuming everything from small mammals to fruit, berries and vegetables (they show a fondness for gourd vegetables) to carrion (dead animal matter). This predator is especially lethal to rabbits, groundhogs, chipmunks, mice and squirrels. Coyotes are also known to be predators of deer. In some cases, this is a good thing since deer have few natural predators beside humans. In other cases, many hunters see the coyote as a decimator of deer population. The Virginia Department of Wildlife Resources stance on the coyote/deer relationship is that they have little affect on the overall population as a whole but can be a problem in some specific areas with more closed forest environments such as the western portion of Virginia with large tracts of National Forest. 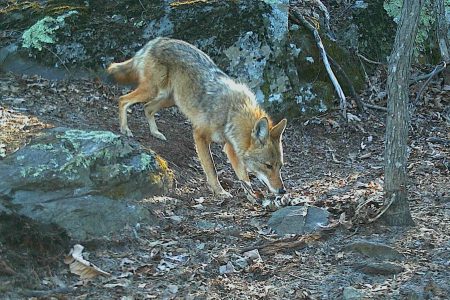 At the request of farmers, ranchers, and hunters, several counties in Virginia have instituted a futile bounty system to control population numbers. Bounties have proven ineffective primarily due to their density dependent reproduction. If the numbers decline, they have the ability to ramp up their reproduction. To understand their ability to adapt, an understanding of their life history is essential. Coyote females, which can breed after their first year, can produce between 2-12 pups per litter. This depends on food availability, overall health and population numbers. This means that if the population numbers are low, the females will have more pups and if the numbers are high, they will produce fewer young. This amazing ability to control their reproductive rates explains why coyotes have proved impossible to eradicate once they have arrived in an area.

One of the best ways to be aware of the presence of coyote is to listen carefully especially close to dusk. The coyote is one of the most vocal of our woodland mammals. They are loud and have a great diversity of language. Their howl, unlike the drawn-out wolf howl, consists of a series of high pitch barks and yips. A few coyotes can sound like quite a pack by combining wavering howls with rapid change of pitch that bounce off trees and rocks to make a pack of three dogs sound like ten.

Despite being a newcomer to the state, the wily coyote is here to stay. Embrace our newest neighbor by keeping a watchful eye and tuning in to hear the language of this especially vocal mammal as you spend time in the Wintergreen wilderness.