Together with Virginia universities, the Smithsonian Institution, and State and Federal government agencies, TNFW conducts and sponsors research that informs best practices for managing Wintergreen’s ecosystems and contributes more broadly to the scientific community’s body of knowledge. TNFW’s Science and Education Advisory Committee, a panel of distinguished scientists and educators, advises TNFW staff, guides and evaluates research, and contributes to environmental education programs provided to area students, teachers and life-long learners of all ages. Learn about committee members here.

Our research helps us preserve the natural and cultural heritage of Wintergreen and our Central Blue Ridge Mountains. Additionally, much of this research is used in education programs offered by TNFW to local school students and adults. Representative projects and programs include:

Wintergreen is far from the first community to call this mountain home. Easy passage across one of the narrowest parts of the Central Blue Ridge and rich resources made this area extremely desirable to pre-contact Native Americans. Ample findings of cortical artifacts suggest that Wintergreen was well-used for extensive mountain stays by Native Americans prior to European arrival, much as it is enjoyed by people today.

Since 2003, TNFW and archaeologists from the School of Integrated Sciences at James Madison University have conducted a multi-year program that has identified and recorded more than 30 archaeological sites and thousands of artifacts on Wintergreen property. Known archaeological sites date from the time of early Native American hunter-gatherers (ca. 10,000 years ago) to camps for the settled Monacan towns in the valley to Euro-American farmsteads and narrow-gauge railroad grades of the early 20th century. 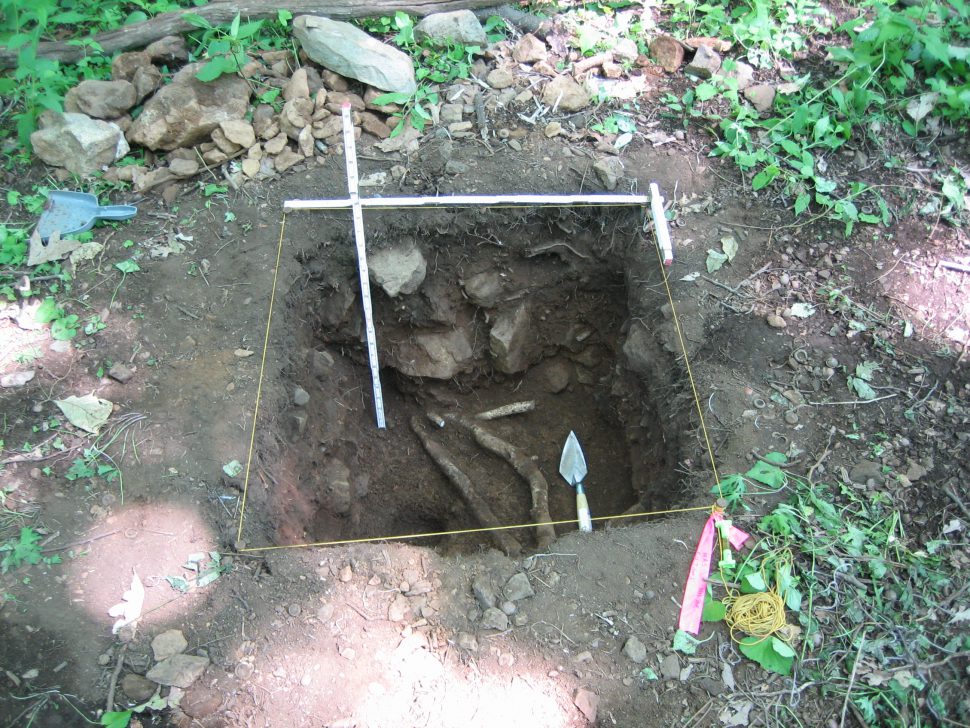 A good example of an excavated test pit at Wintergreen.

The collaborative program to identify and preserve archaeological sites at Wintergreen is directed by Dr. Carole Nash of JMU and supported by many TNFW volunteers and property owners at Wintergreen. It reflects TNFW’s mission to protect our cultural and natural heritage for future generations. Dr. Nash’s work led to TNFW receiving the Council of Virginia Archaeologists’ Michael Hoffman Award in 2010 “For Significant Contributions to Historic Preservation in the Commonwealth of Virginia”. 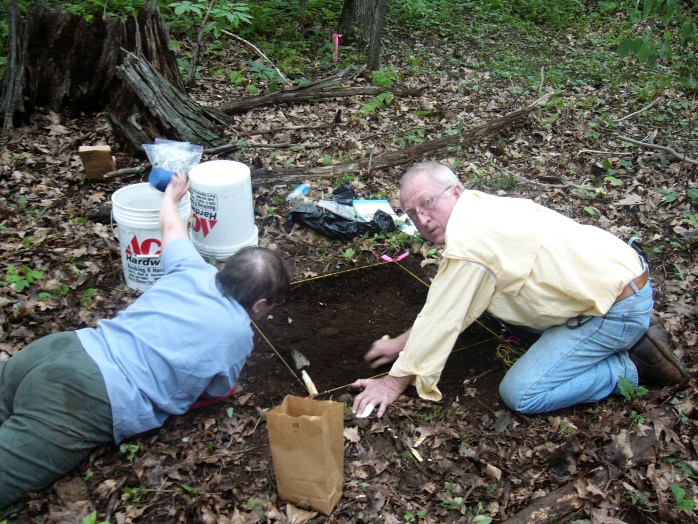 The painstaking process of an archeological dig.

Climate Change Responses of Plants and Lepidoptera Across Mountain Gradients

TNFW’s biggest long-term research project is led by Virginia Commonwealth University assistant professor Dr. Catherine Hulshof. Her study focuses on climate change responses of plants and Lepidoptera across mountain gradients. TNFW’s forester and Dr. Hulshof have established four long-term vegetation monitoring plots at various elevations within the Crawford’s Knob Natural Area Preserve to determine the factors (dispersal, survivorship, growth, and fitness) that lead to plant species migrations across mountain gradients. The second phase of this study will establish long-term monitoring of insect populations to record their present-day distributions across elevation and distributional shifts relative to the distribution of their host plants. This study will have a broad 10-year timeline for work at Wintergreen. 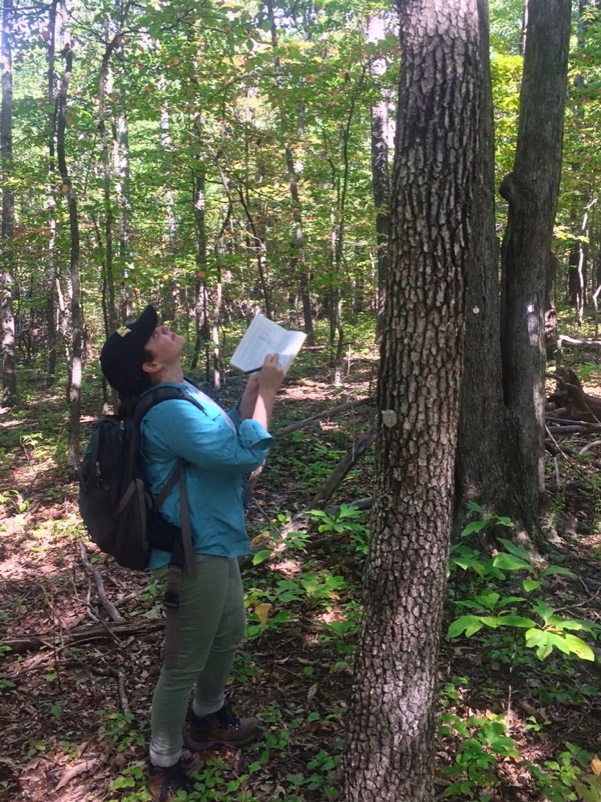 TNFW participated in a joint research project by Virginia Tech and the Virginia Department of Game and Inland Fisheries spawned from a State project aimed at a very different animal, the golden eagle. Starting in 2008, camera bait sites around Virginia were established to study winter distribution of the golden eagle. The cameras caught not just the golden eagles but many elusive creatures such as the spotted skunk. At the same time, studies seeking southern flying squirrels and Allegheny wood rats stumbled upon the rarely seen spotted skunk and a new project was born.

This is where Wintergreen came into the study. In the summer of 2015, a maintenance worker at Wintergreen submitted a video to VDGIF of a juvenile spotted skunk found along Wintergreen Drive. Knowing there was at least one reproducing pair of skunks present, Wintergreen became a camera trapping site. TNFW’s forester and volunteers set and baited camera traps that began yielding a skunk consistently coming to the bait site. With this observation, trapping efforts began. Virginia Tech researchers captured multiple skunks for data collections such as blood samples, weight, sex and most importantly the application of radio collars. This allowed researchers to utilize radio-telemetry in order to better study habitat usage and identify landscape level habitat usage by the spotted skunk. 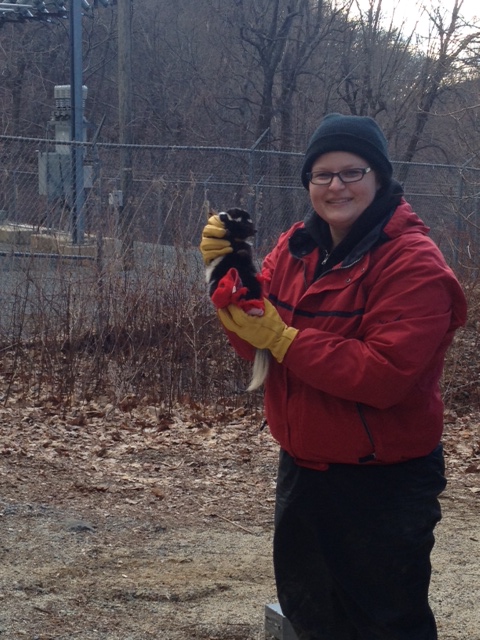 The Natural History and Life Cycles of a Long-Lived Fern, Osmunda Claytoniana

TNFW is exploring the growth rate and age of interrupted ferns in collaboration with Dr. Janet Steven at Christopher Newport University. Interrupted fern (Osmunda claytoniana) is a long-lived fern species that grows in the forest understory and could be an indicator of the age of the forest.  The fern sends out lateral stems just under the surface of the soil and puts up a clump of leaves at the stem tip every year.  Stems grow and branch, and older connections die off, creating a large patch of ferns in the forest. The stems only grow about a half an inch a year, spreading very slowly across the forest.  Genetic markers in the fern’s DNA identify the size of interrupted fern plants.  This information indicates the extreme age of the ferns, as well as the permanence of the forest understory.  Preliminary findings suggest that the ferns may be at least as old as the trees above them, if not older. The results from this study will enable the Foundation to identify and preserve more ancient forest understories. 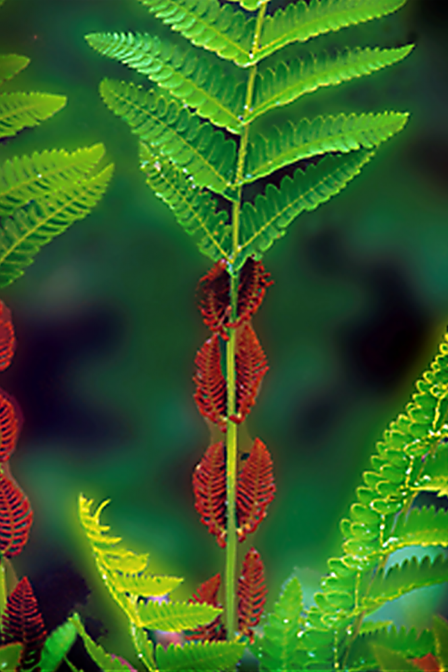 The “interruption” in interrupted fern.

In 2003, Dr. Dennis Whigham and Dr. Melissa McCormick with the Smithsonian Institution, started a project to identify and describe the diversity of fungi associated with several of the fringed orchids (genus Platanthera) found in the Blue Ridge Mountains. They obtained leaf and root samples from several species at a number of different sites at Wintergreen. From these samples, they extracted DNA from each plant and its associated fungus. Using DNA sequences is the only way to accurately identify these fungi, which are cryptic and do not produce easily identifiable mushrooms. 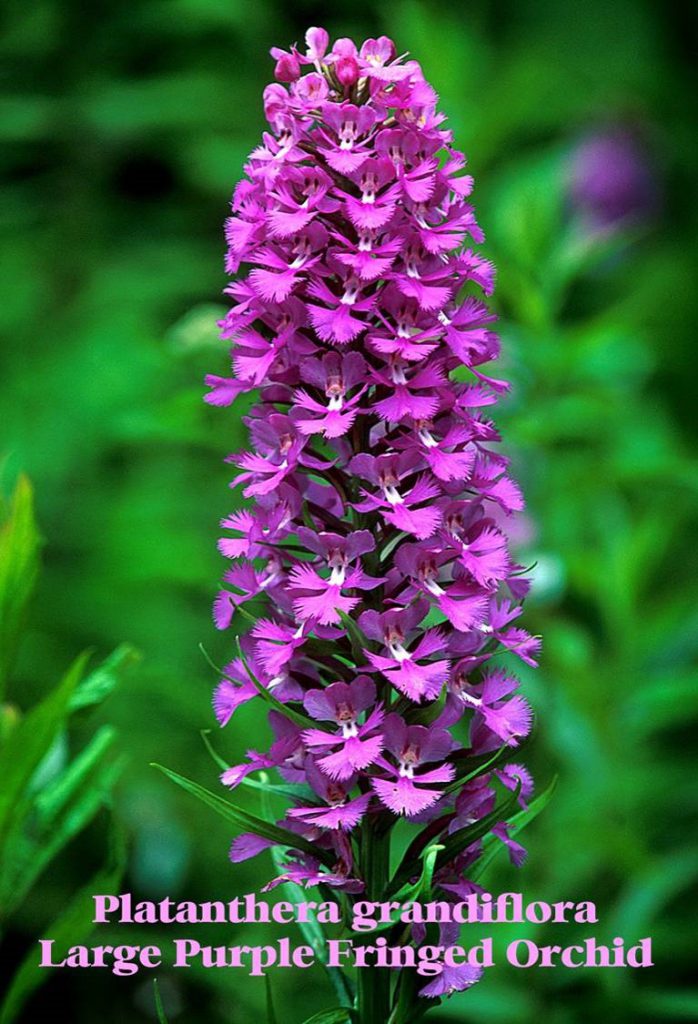 The rare purple fringed orchid on a protected site at Wintergreen.

These researchers found that certain groups of closely related species of Platanthera rely on particular groups of fungi. Some of the species sampled appear to always associate with one particular species of fungus. Because orchids so strongly depend on their fungi, this type of one-on-one relationship means than identifying and culturing the fungi will be essential to orchid conservation and restoration efforts. This project could be useful in preserving some of the most beautiful and fascinating plants in the Blue Ridge.

In 2013, the Smithsonian Institution and TNFW began collaborating on the eMammal project. TNFW’s forester, Josh Palumbo, and 6 Nature Foundation volunteers placed 18 motion-triggered camera traps at predetermined locations around Wintergreen’s backcountry, in sets of 3 cameras – one on trail, one 50 meters off trail, and one 200 meters into the woods. 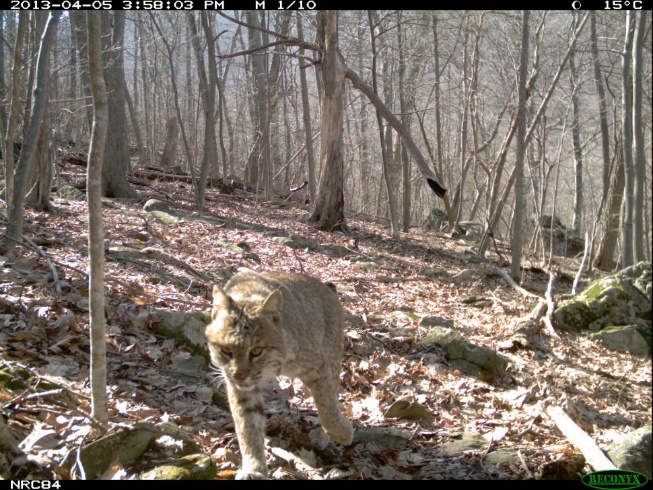 A bobcat on the hunt for its prey.

eMammal is a regional project where citizen scientists work in collaboration with researchers at the Smithsonian Institution and North Carolina Museum of Natural Sciences to document mammals throughout the mid-Atlantic region, and soon, the entire country. Citizen volunteers place “camera traps”, infrared activated cameras, across the landscape in parks and other natural areas to collect photos of mammals as well as other wildlife, providing a rare look into the wildlife world. These photos help researchers answer questions about mammal distribution and abundance and use this information to spark an interest in wildlife, their habitats, and how to conserve them. 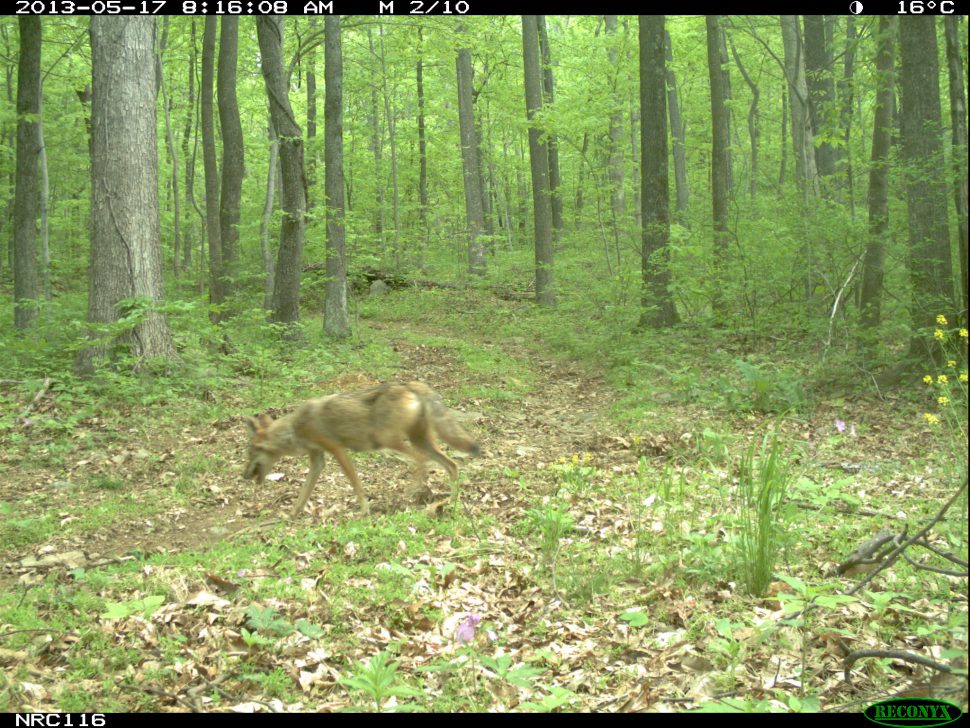 A Wintergreen coyote on the move. 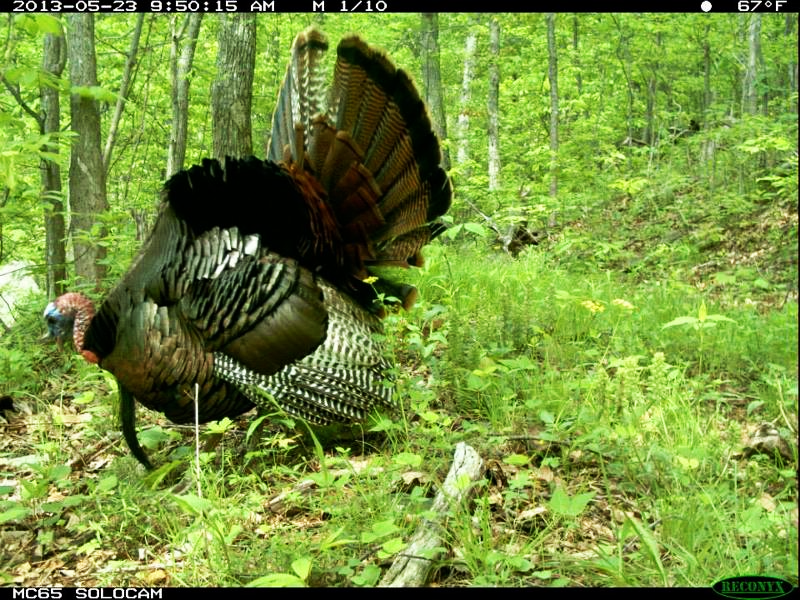 A turkey strutting its stuff during the spring breeding season.

Some of the many animals captured on camera at Wintergreen are displayed on a video loop in the lobby of TNFW’s Trillium House. Please stop by to take a look.

The decline of some North American songbird populations is a major conservation concern. In a collaborative project, TNFW staff and volunteers supported researchers at the College of William and Mary in identifying major songbird habitats, determining the avian species types and number density, and recording findings for use in regional, national and international avian databases. Wintergreen, as a protected wilderness ecosystem and as part of the central Blue Ridge Mountains, is an excellent area for field studies and is of primary biogeographic interest to scientists. 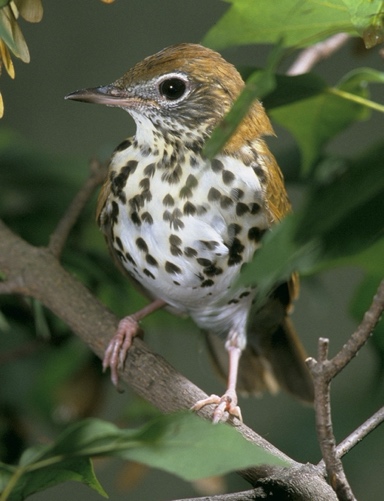 This wood thrush is among the host of migratory birds that call Wintergreen home.

Monitoring and inventory points were established on Crawfords Knob and Devil’s Knob. 47 different species of neotropical migratory songbirds were identified at 15 different locations on Crawfords Knob and 39 different species were identified on Devil’s Knob. This study provided baseline data necessary for continued songbird monitoring and provided policy makers with the scientific basis for decisions to protect the biodiversity of this region.

The Allen Creek Nature Preserve, one of 3 preserves created and managed by TNFW, comprises 3 different ecological community types inside a 6-acre area in Stoney Creek. TNFW recognized it as an important area to preserve, protect, and research, and was able to acquire the property, thus preventing the land from being lost to development or cleared. The preserve was dedicated in the autumn of 2005 and designed as a public walking trail configured in a .7 mile loop. A grant was awarded to TNFW from the Virginia Environmental Endowment Fund to create an internship position to study, collect, and catalog all observable different species of flowering and spore-bearing plants into an inventory list. In addition, the intern mounted a collection of herbarium specimens that remain on file at TNFW’s Trillium House. The assemblies of different plant species there have settled to their modern composition and appearance perhaps three to four thousand years ago. 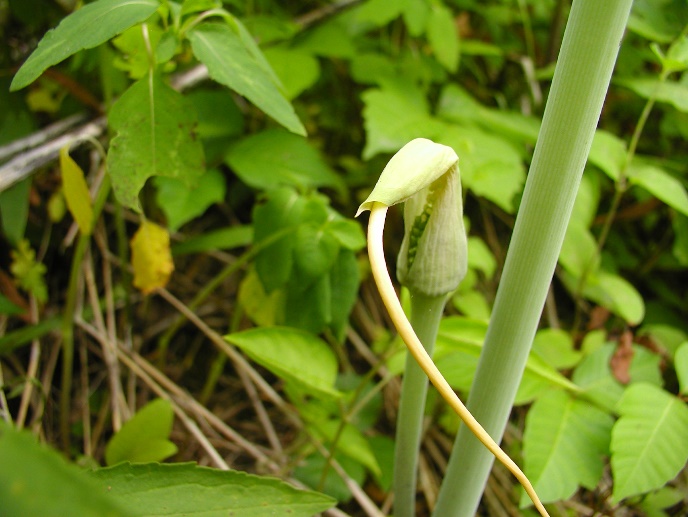 The green dragon is one of the rare plants that resides in the Allen Creek Nature Preserve. 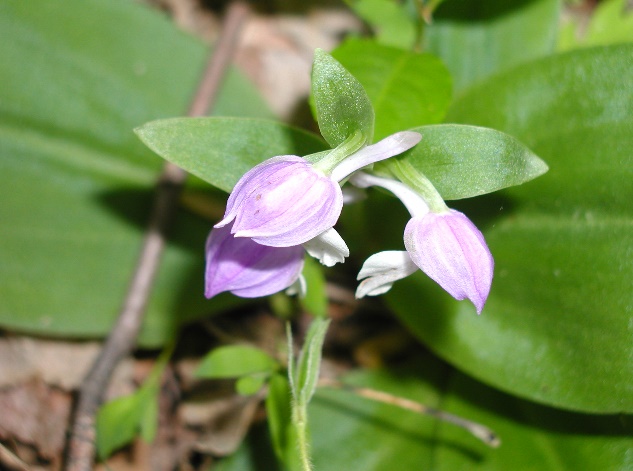 The showy orchid is a unique find in the wetland of Allen Creek.

In this study conducted by TNFW intern Jonathan Schilling, the moss Thuidium delicatulum (Hedw.) was used to quantify lead (Pb), copper (Cu), chromium (Cr), and nickel (Ni) concentrations in the central Blue Ridge of Virginia. Moss bioindication of heavy metals on a landscape scale has rarely occurred in the southern U.S. and has never occurred in the Blue Ridge. The objectives of the project were to evaluate the suitability of this moss for a moss-monitoring study, to assess the effects of several geographical and environmental variables on deposition, and to contribute to the current literature regarding the deposition of heavy metals in the Appalachians. Dr. Jonathan Schilling is now a tenured biology professor at University of Minnesota.

The Flora of Virginia Project

The Flora of Virginia project was envisioned for many years. Early attempts resulted in an Atlas of the Virginia Flora, a 1960’s effort led by Dr. Alton Harvill at Longwood University. The collaborative efforts of Charles “Moe” Stevens, Tom Wieboldt and Dr. Donna Ware resulted in the first publication of this important document in 1961.

The initial meeting of the Flora of Virginia Committee was held during TNFW’s Spring Wildflower Event at the Nature Foundation in the late 1990s along with the designated authors, board members, and members of The Foundation’s Science Advisory Committee. One member of this committee, Dr. Chip Morgan, and one TNFW staff member, Rosalind Rowe, worked on the project through the years it took to complete it. In 2012, the three co-authors, Dr. Alan Weakley, Chris Ludwig, and John Townsend presented The Flora of Virginia with its opening debut at TNFW’s Trillium House where the project’s first meeting had been held.